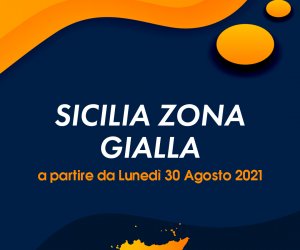 The Italian island region of Sicily will soon be placed under ‘yellow’ zone restrictions again, after the rate of coronavirus infections and hospitalisations soared in recent weeks.

“I have just signed a new ordinance that brings Sicily into the yellow zone,” Health Minister Roberto Speranza announced on social media early on Friday evening.

He said the move was “confirmation that the virus is not yet defeated and that the priority is to continue with the vaccination campaign and the prudent and correct behaviour of every one of us.”

The rule change is expected to take effect from Monday. However Speranza did not confirm when the new restrictions would come in, and no further details were immediately available on the health ministry’s website.

Having ‘yellow zone’ restrictions reimposed will, among other rules, mean a return to wearing a face mask in all public places, both indoors and outdoors, and the return of limits on restaurant opening hours and group sizes at tables.

Italy’s so-called ‘green pass’ will also become compulsory for teachers and on trains and planes across the country from September 1st.

However, further measures were considered necessary in Sicily, where vaccination rates are lower than the national average and where crowds have flocked for the summer season.

There are also concerns about the health situation in the regions of Calabria and Sardinia, which are each over the limit for two out of the three parameters.

While ten Italian regions were deemed to be ‘moderate risk’ by the latest report from the Italian health ministry on Friday, Sicily is the only Italian region at moderate risk but “with a high probability of progression”.

Sicily has been expected to lose the low-restriction ‘white’ zone classification since last week after the rate of infections and hospitalisations reached critical thresholds.

Some of Sicily’s smaller islands had last week placed new curbs on nightlife and day trips after illegal parties and crowding was blamed for a surge in new cases locally.

Every region has been ‘white’ for more than two months under Italy’s four-tiered system of restrictions.

As several regions risked a yellow zone classification in July due to sharply rising infection rates, the Italian government responded by changing the parameters of the zones, making it more difficult for a region to change from white to yellow.

Under the new parameters, a region becomes a yellow zone if the following thresholds are reached at the same time:

The incidence of weekly cases of infection per 100,000 inhabitants is between 50 and 150.
The occupancy rate of intensive care units exceeds 10 percent.
Occupancy reaches 15 percent in the case of general hospital wards.

The Italian island region of Sicily will soon be placed under ‘yellow’ zone restrictions again, after the rate of coronavirus infections and hospitalisations soared in recent weeks. “I have just signed a new ordinance that...

Admin chaos and Covid-19 has left 1,000 coffins unburied in Sicily. Now some are exploding

A combination of administrative backlogs, a heatwave, and a spike in Covid-19 deaths have resulted in unburied, exploding coffins in Palermo, Sicily. Around 1,000 coffins waiting to be laid to rest at the Rotoli cemetery in Palermo are being...