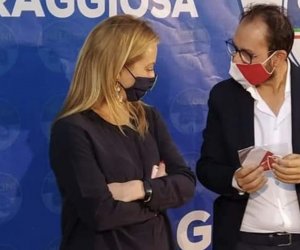 The far-right Italian party Brothers of Italy, tipped to win Sunday's election, has suspended one of its candidates for praising Adolf Hitler on social media.

In a 2014 Facebook post, Calogero Pisano, a party co-ordinator in Agrigento in Sicily, compared party leader Giorgia Meloni to "a great statesman of 70 years ago".

He added that he was referring to a "German" and not Benito Mussolini.

The party said Mr Pisano no longer represented it at any level.

Ms Meloni has been trying to distance the Brothers of Italy from its neo-fascist roots.

The party leads the polls ahead of Sunday's vote, with promises of tax cuts and a hard line on immigration.

Ruth Dureghello, the president of Rome's Jewish Community, criticised the comments, saying "the idea that someone who hails Hitler could sit in the next parliament is unacceptable", Ansa reported.

Founded in 2012, Brothers of Italy (Fratelli d'Italia) has its political roots in the Italian Social Movement (MSI), which emerged from the wartime dictator Benito Mussolini's fascism. The party maintains the logo of post-war far-right parties: the tricolour flame, often perceived as the fire burning on Mussolini's tomb.

Embracing a controversial old motto, "God, fatherland and family", Ms Meloni says she wants tax cuts and to have Italy's president elected by popular vote. She also campaigns against LGBT rights, wants a naval blockade of Libya and has warned repeatedly against Muslim migrants.

Ms Meloni strongly rejects the fascist label, saying recently it had been "consigned to history".

In Italy's last elections in 2018, her party received little more than 4% of the vote, but she's now the favourite to to win. Backed by two other right-wing parties, the League and Forza Italia, polls suggest they are heading for a majority in Italy's two houses of parliament.

Sicily, Barbara Mirabella arrested for corruption. She was a candidate for the regional Brothers of Italy

Barbara Mirabella, a candidate for the Regionals in Sicily for FdI, and former municipal councilor for Culture in the council of Salvo Pogliese was arrested for corruption by the Catania mobile squad and is now under house arrest. Last August...

The far-right Italian party Brothers of Italy, tipped to win Sunday's election, has suspended one of its candidates for praising Adolf Hitler on social media. In a 2014 Facebook post, Calogero Pisano, a party co-ordinator in Agrigento in...