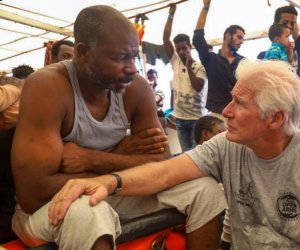 The leader of the Italy's right-leaning Lega party, Matteo Salvini, lashed out at the start of his trial for the alleged kidnapping of 147 migrants while he was interior minister.

The migrants were on board a ship owned by Spanish NGO Open Arms to whom Salvini denied permission to disembark in Italy in August 2019, leaving them stranded at sea and putting their lives at risk.

Among the witnesses listed in the lawsuit is American actor Richard Gere, who visited the migrants on board while they waited off the coast of Italy, which, for Salvini, is an example of the lack of seriousness of the accusations leveled against him.

"Let's talk about Richard Gere. You tell me how serious a trial is where someone comes from Hollywood to testify about my nastiness," he questioned, speaking to reporters after the first hearing in Palermo on Saturday.

A day earlier he had joked that if Gere was officially named a witness, he would ask for an autograph for his mother.

Other evidence to be used against Salvini includes communication records from emergency calls from the NGO ship and Italian Coast Guard when they assigned the port of Lampedusa as a port of disembarkation, to determine at what point and in what form Salvini intervened.

Salvini has repeatedly denied the accusations of kidnapping but has admitted to blocking the ship from docking in Italy, saying it was his duty as interior minister.
He argues that because the Open Arms vessel was Spanish flagged, the migrants should have been taken to Spain.
His lawyer Giulia Bongiorno, who previously represented Rafaelle Sollecito in his trial with Amanda Knox for the murder of Meredith Kercher, has argued that this trial should not even be held under Italian jurisdiction because the ship is Spanish and that a Spanish-flagged ship did not have authority to dock in an Italian port without permission.

Sicily Governor Nello Musumeci said Wednesday that he had signed an order making it obligatory for people aged 12 and over to wear facemasks when outdoors in the region due to the upswing in COVID-19 contagion. He also announced restrictions...

The leader of the Italy's right-leaning Lega party, Matteo Salvini, lashed out at the start of his trial for the alleged kidnapping of 147 migrants while he was interior minister. The migrants were on board a ship owned by Spanish NGO Open...