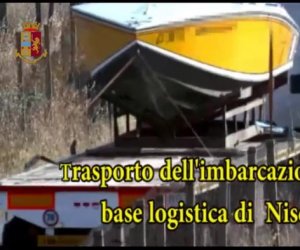 Police on Thursday arrested 18 people, 11 Tunisian nationals and seven Italians, to break up a human trafficking ring that operated from Sicily.
The traffickers allegedly regularly took off from the port of Gela or from the coast of the province of Agrigento to pick up asylum seekers in Tunisia and then immediately return with them to Italy.

Police took 12 of the suspects to jail, while the other six were put under house arrest.

Investigators believe the traffickers picked up 10 to 30 asylum seekers during each trip.

The evidence gathered by prosecutors Caltanissetta includes a wiretap in which one trafficker gives an order to another for the asylum seekers to be thrown overboard if the boat encountered problems such as engine failure.

A man whose identity was used by Italy's most wanted mafia boss - Matteo Messina Denaro - has been arrested in Sicily. Andrea Bonafede was arrested by Carabinieri police on a warrant issued by judicial authorities in Palermo, the capital of...