Matteo Messina Denaro, one of the bosses of the Cosa Nostra Mafia in Sicily and Italy’s most wanted man, has been arrested 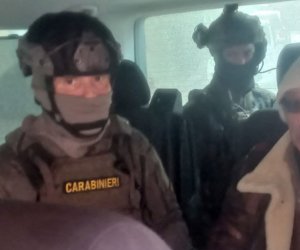 Matteo Messina Denaro, one of the bosses of the Cosa Nostra Mafia in Sicily and Italy’s most wanted man, has been arrested by police while being treated in a private health clinic in Palermo, prosecutor Maurizio de Lucia said Monday.

He had been a fugitive since 1993 and was considered by Europol one of the most wanted men in Europe, de Lucia told CNN.

“It is a victory for all the police forces that have worked together over these long years to bring the dangerous fugitive to justice,” Italy’s chief of Police, Lamberto Giannini, said in a statement congratulating the Carabinieri – Italy’s military police – and the Palermo Public Prosecutor’s Office.

Italian Prime Minister Giorgia Meloni tweeted: “A great victory for the state, which demonstrates that it does not give up in the face of the Mafia.”

Defense Minister Guido Crosetto called the arrest “a sign of a state that wins against Mafia.”

Speaking outside the prosecutor’s office, Meloni said that while Italy had not yet won the “war” against the Mafia, this was a “battle that was fundamental to win.”

“It’s a day we can celebrate and tell our children that the Mafia can be defeated,” she said.

A life of crime
Messina Denaro is thought to have ordered dozens of Mafia-related murders, and was given several life sentences in absentia for his many crimes, most notably in 1992 for his involvement in the separate murders of anti-Mafia prosecutors Giovanni Falcone and Paolo Borsellino.

He received his most recent life sentence in 2020 for fatal bombings in Milan, Florence and Rome in the late 1990s, and for the murder and torture of the 11-year-old son of an enemy who gave evidence against the Sicilian Cosa Nostra.

Having been a wanted man for nearly 30 years, he was Cosa Notra’s longest-hiding fugitive.

Messina Denaro was taken into custody around 10 a.m. local time after a raid carried out by more than 100 specialized agents with the anti-Mafia Carabinieri in the early hours of the morning. The Maddalena clinic where he was arrested is a private clinic known for plastic surgery and other elective surgeries. It is not known what treatment Messina Denaro was receiving.

The Carabinieri press office told CNN on Monday that he’s being held in a “secret location.”

In recent years, anti-Mafia security forces have been closing in on Messina Denaro’s circle, seizing around €3 billion ($3.25 billion) in assets belonging to companions, relatives and associates thought to be supporting his life in hiding, and making arrests between 2009 and 2010.

Messina Denaro – known as Diabolik – is regarded as one of the successors of Bernardo Provenzano, who was arrested while in hiding in a farmhouse outside Corleone, Sicily, in April 2006.

Crime was a family affair for Messina Denaro, born to a known Mafia boss in Sicily on April 26, 1962. Among those arrested in the 2009-2010 crackdown was his brother, Salvatore Messina Denaro, who refused to testify about his whereabouts.

In 2013, his sister, Patrizia Messina Denaro, was sentenced to 14 years in prison, a term she is still serving, for being a member of the Mafia.

While in hiding, Messina Denaro maintained several romantic relationships, including with his fiancée, Franca Alagna, with whom he had a daughter, Lorenza. Another of his high-profile liaisons was with an Austrian hotel worker, who bragged that the two of them traveled to Greece on vacation despite his being on Europol’s most-wanted list.

In May 2011, police believed they were surveiling Messina Denaro at a farmhouse near his home town of Castelvetrano, but they failed to capture him despite the involvement of hundreds of officers. His DNA was later found at the site.

Adding to police embarrassment was the arrest of a British man at a restaurant in The Hague in 2021, after the anti-Mafia police wrongfully identified him as Messina Denaro.

A suspected sighting of him in a car in September that year led to a manhunt and hundreds of tips, the prosecutor said.

Ten migrants die of hunger and cold on boat at sea

The Italian Coast Guard has rescued those onboard a six-meter boat that left from the coast of Sfax in Tunisia carrying dozens of African migrants. Eight corpses were found onboard. At least two people went missing at sea and are presumed...